Comparative Analysis of Status of Education in Gilgit-Baltistan

There are no two opinions that a person who is able to read or write or do basic arithmetic during early formative years is highly likely to acquire other important life skills that are important to have a productive and meaningful life in today's competitive world. Therefore, it is very much important for all of us to know how our children learn and also identifies areas where they needed to bring further improvement with respect to educational attainments. In this context, I have written this write-up on the basis of secondary data of ASER Survey-2015 which have lately assessed 13,056 children having an age range of 3 to 16 years from 208 Governments and 120 Private schools of 209 villages from all 7 districts of Gilgit-Baltistan, Pakistan.

The main objective of this write-up is to give you a fair outlook about the latest status of education in Gilgit-Baltistan (GB) Pakistan. So that we - all the stakeholders in GB - could see our educational attainments with reference to  national level figures and play our due roles to place learning at the center of our attention by moving from evidence to solutions; thus achieve sustainable development goal four (SDG-4) by focusing on access-plus-quality education in GB. 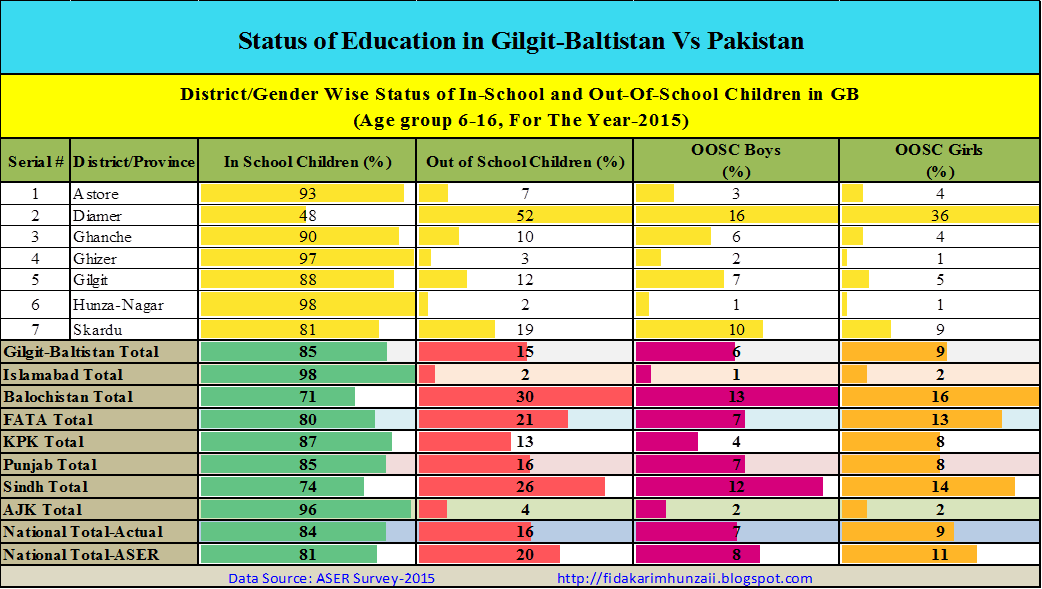 AS can be seen from the aforementioned table, 85% of our children are enrolled in school in Gilgit-Baltistan as compare to the 81% enrollment rate at the national level in Pakistan. This indicates that GB is performing better in terms of enrollment in the education arena of Pakistan.

On the other hand, district Diamer is worst performing with respect to enrollment of children having an age range of 5 to 16 which in inversely affecting the overall enrollment rate of GB. The data also reveal that there is a wide gap in the enrollment between the boys and girls in the educational institutions in Diamer. According to recent media reports "in District Diamer with an estimated population of 200,000-plus, only four girls attend middle school". Even though district Diamer had five members in Gilgit-Baltistan Legislative Assembly (GBLA) from 2009 to 2015 but more than 52.2% children are still out of school in District Diamer. This shows criminal negligence from the political leaders and representatives from Diamer who needed to work on war footing to address this dismal situation that is the product of a confluence of adverse factors, including a difficult geography, insufficient government resources and cultural biases against women’s education.

In district Skardu 18.7% of children are out of school in the year 2015 from where 5 PPP members along with other 2 members, including then Chief Minister (CM) Mehdi Shah were sitting in GBLA, but here again, they have failed to provide education to almost two fourth of children from district Skardu. Almost the same is the case with district Gilgit-the constituency of current CM Mr. Hafizur Rahman, where 11.8% children are out of school.

2. Status of Enrollment in Pre-Schooling

As the scientific research have categorically proved that early years schooling have an important role in the development of social, emotional, and cognitive skills of a child. Therefore, we the GBians have started to understand this as 40% of our 3 to 5 years old children are receiving Early Years Schooling as compared to the 37% enrollment rate in ECE at national level in Pakistan. But we needed to concentrate on this aspect of education, especially in Diamer, Skardu, Ghanche and Gilgit as Hunza and Ghizer district are relatively moving in the right direction.

In the backdrop of worst educational indicators and gender disparity in Diamer, the GBLA members from GBLA 15 to 18 Mr. Haji Shah Baig, Mr. Janbaz Khan, Mr. Haidar Khan and Mr. Muhammad Wakeel needed to play their due role here to ensure quality education to the children of their constituents in Diamer. Similarly, the Civil Society Organizations working on education sector needed to concentrate especially on Diamer as the indicators show the dire need of intervention there in Diamer.

3. Learning Level of URDU by School Type and Gender

To enroll our children in school is mere a mean to an end; and the end if to improve learning level of children going to school. In this regard, when we have a look at the subject-wise learning outcomes of school going children in Gilgit-Baltistan, it comes to know that in Urdu our children in GB are learning above (64%) than the learning level of Urdu at national level(i.e. 61%). It is interesting to see that at the provincial level, the children from district Ghizer are outperforming in Urdu at GB level, followed by children from Astore, Diamer and Gilgit. Whereas, school going children and concern teachers from Hunza-Nagar, Skardu and Ghanche needed to concentrate on improving their learning level in Urdu. It is high time for concern departments and stakeholders to concentrate on improving learning outcomes of our children in Urdu in Hunza-Nagar, Skardu and Ghanche of GB

4. Learning Level of ENGLISH by School Type and Gender

There are no two opinions about the importance of learning English language, as it is the language of science and technology in today's globalized world. English is the dominant business language and it has become almost a necessity for people speak English if they are to enter a global job market. In this context, it is heartwarming to see that our Government and Private schools are equally equipping our children with English language as the learning level of English is much higher in GB than that of learning English at national level in Pakistan.

As can be seen from the given table that, at national level parents are spending more resources to provide tuition for their children from class one to ten; whereas, in GB this is not a common practice though it has taken momentum during recent years. For instance, in GB, overall 7.8% children were receiving paid tuition during the year 2013 whereas, this has been increased to 13% in the year 2015 showing a whopping 60% increase in the rate of receiving paid tuition in GB.

When we have a look at this graph, it comes to know that year on year spending on paid tuitions have been increased in GB in general and in Astore, Hunza-Nagar and Ghanche district in particular. This is one of the reasons that the learning outcomes of children from these districts are good. At regional level, students from district Gilgit and Skardu are relatively getting not that much paid tuition as compared to other districts in GB.

7.  Status of Parents Having At Least Primary Schooling

As can be seen from this table, 39% parents of school going children having an age range of 3-16 years have at least primary schooling in GB; whereas, this is 38% at the national level. District-wise Hunza-Nagar has the highest number of parents who have passed at least primary level of schooling. Whereas, Diamer, Astore and Skardu have the lowest number of at least primary pass parents. In district Hunza-Nagar, the mothers of school-going children are more educated than those of fathers from Skardu, Astore and Diamer district in GB. This is a great omen for the future of the bright future of Hunza-Nagar in the days to come.

From this report, we can easily infer that at national level GB is performing better regarding enrollment and educational attainments in language (Urdu/English) and numeracy (Mathematics). But at GB level, still a lot more is needed to be done to ensure access plus quality education, especially at Early Childhood Education / Development (ECE/D) in all parts of GB. Similarly, it has been cleared from this report that learning level of children attending private schools are only marginally better-off than those of the kids attending private schools of GB as our government schools are doing a good job in imparting quality education to our children, thanks to their attractive salaries in GB.

In terms of enrollment in early years schooling to class 10, gender parity and parental education district Hunza-Nagar stood on top of the list among all the seven districts of GB. Nevertheless, to sustain the soft image of Hunza as "a paradise of high literacy and gender equality in a remote corner of Pakistan" we all the stakeholders needed to put our best to improve learning outcomes of children from class 1 to 10 especially in Mathematics and Urdu. I am fully convinced that now that when district Hunza have been separated from Nagar, the indicators will definitely show much better outlooks in forthcoming surveys as the educational attainment related indicators were being affected due to low literacy rate in Nagar district.

Similarly, in terms of learning attainments in Urdu, English and Math, district Ghizer and Astore secure 1st position that followed by Hunza-Nagar and Gilgit respectively.

Although district Ghanche have shown impressive outlook in terms of enrollment in school other than ECE; nevertheless, it needed to concentrate on improving learning outcomes of children from class 1 to 10 in English, Urdu and Mathematics.

In Diamer district, enrollment in  is highly skewed in favor of boys as the OOSC are more than In-School children in class 1 to 10 and only 16% of Girls from these enrolled students can read at least  a sentence. In ECE class only 9% children are enrolled whereas, 91% of ECE level kids are out of school in Diamer. Therefore, it is strongly recommended to all the stakeholders to concentrate on access plus quality in Diamer. It is a refreshing to see that students from Diamer are more talented in ARITHMETIC than those of the students from Hunza-Nagar district.

It is interesting to see that district Ghizer have impressive credentials with respect to overall enrollment, parental educational and educational attainments of children from class 1 to 10 in Urdu, English and Mathematics. Nevertheless, enrollment in eearlyears schooling and paid tuition are yet to catch up to speed with the passage of time here in Ghizer.

Skardu, once a top performing district in GB, has experienced setbacks during recent years in educational attainments, enrollment and gender parity due to alleged corrupt practices in hiring teachers and rent seeking activities of last PPP government under its representative in GBLA and then CM GB from Skardu.

In the backdrop of the aforementioned facts and figures, our unique ground realities and raising needs of our region with respect to regional connectivity and energy related mega projects, it can be inferred that quality education is the only way for the meaningful development of GB in the days to come. As such, our education sector in GB has every reason and potential to be nurtured as a model for the rest of the country. However, efforts are needed at multiple levels and in all districts to strive for the cause of education.

Prior to the 18th Amendment to the Constitution, education was funded by the federal government, and G-B did not even have a regional government. Now that the G-B government has been given autonomy, it needs to learn how to exercise it with respect to policy formulation and implementation. The current GB government's resolve to hand over the early years schooling to womenfolk besides inducting thousand of teaching and non-teaching staff in the government's education department is the right move in the right direction. Nevertheless, it needed to formulate a policy on education or children’s rights and address our education related issues on top priority basis. So that we could take a reasonable place in the globalized world.

By Fida Karim. The Writer is the Country Manager-Monitoring & Evaluation at an international donor funded nationwide education improvement program in Pakistan. He can be reached at [email protected]